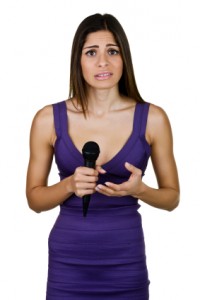 I can help you improve a skill that almost everyone will have to learn: public speaking. I’ve worked with independent executives, corporate executives, educators, performers, people from all walks of life suddenly called to speak in front of the group. One thing I discovered is that the fear of public speaking is rooted in shame and guilt.

Guilt is also known as the Impostor Syndrome: People don’t feel they deserve being in the place they’re in, so they’re not confident.

In either professional or personal life, the guilt doesn’t make sense. You’re the one in a suit on stage – you deserve to be there! Think about it this way: If not you, then who and why isn’t the supposedly more important person there?

You’re wrong to think less of yourself when obviously you’re the one who counts. Don’t think about what other people have in their heads. All kinds of things are in there that don’t matter, trust me. People need you. You have got to stop doubting yourself. Most of the time, it doesn’t even make sense why you do that. And if you don’t know how to stop doing that, I’ll teach you.

As for shame, shame stems from anxiety over what the outcome of your speech will be. Performers, no matter how confident they appear, are always afraid their shows will fail. And then what will they do when that happen?

Comedians, for example, have a very rough life! What if no one understands the joke? All this anxiety can have physical consequences: tight muscles, blurting out the wrong things, embarrassing yourself. These are all psychological and physical effects that can be treated with hypnosis.

If you fit any of those characters I just talked about, you have a serious problem with public speaking. You might even have a professional obligation to take care of that! The issue isn’t shyness, usually, because you don’t need to be shy to be afraid of speaking in public. Worse, if your vocation calls for making speeches, being in front of people, you have no choice but to get good at it or change careers.

Through a combination of coaching and hypnotherapy, I’ll be helping you understand yourself and why you’re facing obstacles (basically everything I just talked about above). Hypnosis will cover all the bases and make sure that you get to communicate everything you need to so that therapy isn’t just a quick fix but has results that last for as long as possible.